The Global Burden of Diabetes

Diabetes is one of the chronic diseases and among the top 10 leading causes of death in the world. The disease is a heavy burden for both patient and society. If not treated, it is associated with many complications and increased mortality. Early diagnosis and treatment delays complications and extens life. It is important to screen, diagnose, monitor and provied approriate care to people with diabetes.

Alarming figures presented by both IDF and WHO show that diabetes is growing at a rapid pace worldwide impacting every country, every age group and every economy across the world.

When broken down by region, every area in the world is estimated to increase with the highest percentages in the Middle East and Africa, followed by Southeast Asia, South and Central America, the Western Pacific, North America/Caribbean, and Europe. 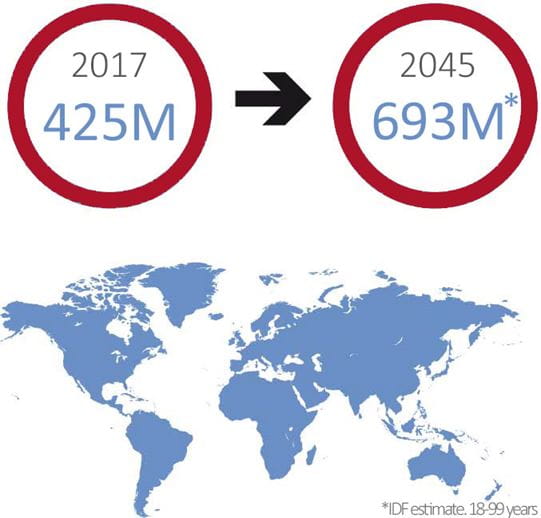 Diabetes costs are high and increasing. Diabetes imposes a large economic burden on the global healthcare system and the wider global economy. Healthcare costs continue to increase with 12% of global health expenditure dedicated to diabetes treatment and related complications that account for the majority the total expenditure. It is estimated that the majority of countries spend between 5% and 20% of their total health expenditure on diabetes. The costs associated with diabetes include increased use of health services, loss of productivity and disability. Health care expenditures for people with diabetes have been found to be 2-3 fold higher than people without diabetes.

What can we do to reduce diabetes rates?

Diabetes is one of four priority Non- Communicable Diseases (NCD) targeted for action by world leaders. The starting point for living well with diabetes is an early diagnosis – the longer a person lives with undiagnosed diabetes, the worse their health outcomes are likely to be. 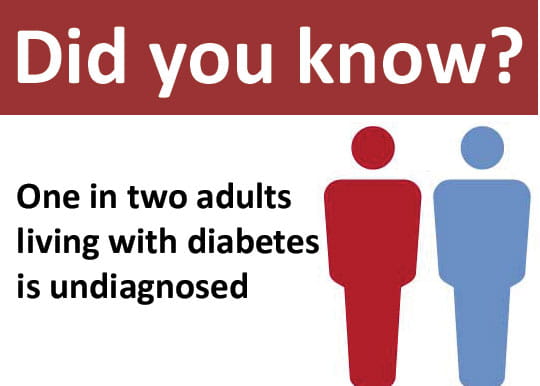 Worldwide, nearly half of all people with diabetes are undiagnosed. With united efforts we can affect the diagnosis rates through increasing awareness of the symptoms of type 1 diabetes (thirst, increased urination, tiredness, hunger), and screening people at high risk of type 2 diabetes (increased age, increased body weight, low level of physical activity, and unhealthy diet).

Early diagnosis can prevent or delay the long-term health complications of people who are undiagnosed with type 2 diabetes. Progress has been made in introducing screening programs, and diabetes risk scores have been tested in more than 30 countries worldwide.