Worldwide more individuals have iron-deficiency anemia, than any other health related problem

Anemia is a public health problem that affects populations in both rich and poor countries. Its primary cause is iron deficiency (IDA), but a number of other conditions, such as malaria, parasitic infection, other nutritional deficiencies, and hemoglobinopathys are also responsible. Anemia is a condition in which the number of red blood cells or their oxygen-carrying capacity is insufficient to meet physiologic needs, which vary by age, sex, altitude, smoking, and pregnancy status. In its severe form, it is associated with fatigue, weakness, dizziness and drowsiness. It disproportionately affects children and women of reproductive age with far-reaching health consequences such as cognitive dysfunction and an inability to reach their full potential.

Plasma volume increases more rapidly than red cell mass during pregnancy and a drop in Hb value occurs. Untreated anemia may lead to the inability to fulfill a healthy pregnancy and deliver a healthy baby. For this reason the 1,000 days between a woman’s pregnancy and her child’s second birthday offers a unique window of opportunity to shape a healthier and better future.

It is estimated that as many as 80% of children in developing countries will be anemic at some point before the age of 18. Even mild anemia can lead to fatigue and interfere with a child´s ability to perform at school. For infants, anemia may cause irreversible delay in mental, motor, and behavioral development. Because of rapid growth, expansion of total blood volume and the onset of menstruation, increases iron requirements making adolescent girls more susceptible to anemia. Anemia during adolescence influences women’s entire life cycle since anemic girls will have lower pre pregnancy iron stores. Investing in preventing anemia during adolescence is critical for adolescent girls themselves as well as for the survival, growth and development of their children later in life.

Nutrition and the SDGs — and anemia?

The 17 Sustainable Development Goals and their associated 169 targets were recently release by the UN; the indicators will provide governments with a very clear picture of what they need to do, and what would serve as further value-added actions. According to target 2.2 in Global Goal 2 on Zero Hunger, the stated aim is to eradicate “all forms of malnutrition” and it mentions specific population subgroups including children under 5, adolescent girls, pregnant and lactating women, as well as older people.

How to diagnose Anemia Early detection and treatment of anemia caused by iron or vitamin deficiency is relatively simple and could significantly improve quality of life and general well-being. Measuring Hemoglobin levels should therefore be included in routine examinations. Minor deviations from normal hemoglobin values may be a first sign of severe disease and/or iron/vitamin deficiency. The hemoglobin test should be simple, quick and accurate across the range of normal and abnormal values.
HemoCue has for over 30 years developed and manufactured devices for diagnosing anemia, and is now present in more than 130 countries, also in demanding climates. The HemoCue Hb solution appears to be reaching those who need it the most. 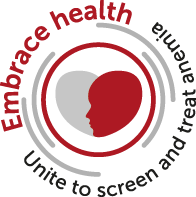 The silhouette is that of a human being - regardless of age, gender and ethnicity

It also express a motion

It is about health - our global health, our  future

It is about Health – Sustainable Development Goal No. 3